A short while ago, I discovered a new Canon EF/EF-S Lens Adapter to Sony NEX Camera systems

. It's basic function is similar to the more expensive Metabones adapter in which you can control the electronic iris of the lens natively through the Sony NEX camera body. I have confirmed that it works great on my Sony NEX-7, and here Landon has his own review and confirmation of it working great on the Sony FS700. [Thanks Landon]. As mentioned in the video review below, it's half the price and also easier to obtain than the metabones product also.

Exciting stuff, but now for a bit of even better news. Recently there's a new version of this adapter which comes with the much needed Tripod Ring adapter + AUTO FOCUS support

. The auto focus is said to utilize the NEX's inherent Contrast Difference AF, and focusing speed is between Sony's LA-EA1 and LA-EA2 adapter. But would be a bit slower than original Canon AF. This latest version Auto Focus EF/EF-S lens to Sony NEX adapter can be found via eBay (Click Here). 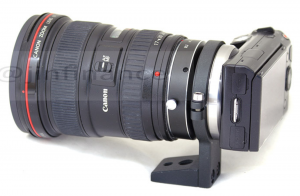 This thing took about 13 days to ship to California, but it's finally here and i'm pretty impressed. This adapter allows you to mount Canon EF lenses to the Sony NEX camera and control all of the aperture settings natively. I haven't tried it yet, but it should communicate with the lens and store EXIF information into your photos as well. As you can see from the video it works pretty flawlessly, responds very quick, and build quality is very nice. To enable IS when taking photos, you would hold the shutter half way down - or that's what I had to do to get it going. During Video Mode, the Image Stabilization is on as soon as you start recording.

I didn't have much time to test everything as i'm getting ready to fly out for PhotoPlus, but I did try to 'wig out' the adapter. When removing the lens while the camera was still powered on, the aperture controls didn't come back. The adapter does not like hot lens swaps. Simply powering the camera down doesn't always help, but removing the entire adapter from the camera body and then starting over always works. There is another Metabones adapter out there that can adapt EF lenses to NEX cameras, but it's about twice the price. I have not had the chance to test this on an FS100 or Sony FS700, but i'm hopeful it should work seamlessly. If you're shooting on the Sony NEX system, you might want to give this guy a try. You can find this Canon EF Lens to Sony NEX adapter via eBay (Click Here). 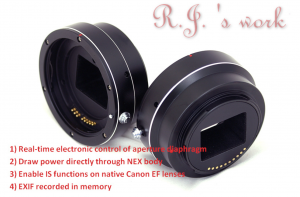 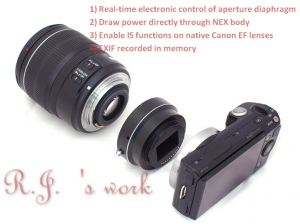 For those shooting on the Sony FS100, FS700, or NEX cameras who wish to control the iris of Canon EF lenses you would need something like the Metabones electronic adapter. In the last few weeks, a few other companies have developed a similar adapter that allows you to control the iris of a Canon EF lens directly from the Sony body, and states that it also supports Image Stabilization. One new adapter quotes the following:

" I hope this does not sound too silly: We developed this 100% on our own. We took a different route, and achieved the same result, if not better 🙂 "

That's a bold statement, and i'm hoping to shed more light to see how well this new Canon EF to Sony NEX smart adapter works. Especially since it's currently half the price of the Metabones adapters. If you guys have more information, leave a comment. You can find this new EF to NEX adapter via eBay (Click Here).

For these 8mm Rokinon Lenses, check out the discounts following the links below. 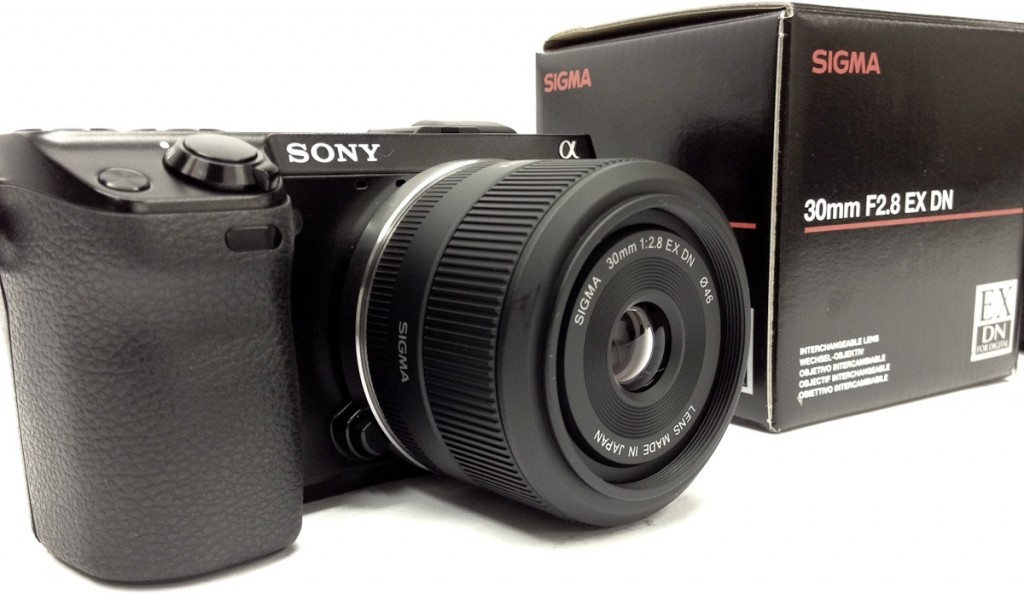 Just got this in today so we'll see how it performs. Seems to be a fairly popular lens due to it's backorder status on most websites. Part of the appeal when shooting with the Sony NEX-7 is it's compact size. I wanted an autofocus prime lens and decided to go with the Sigma 30mm F/2.8. Smaller and shorter profile than using an older lens with an adapter in between, and much more lightweight to make the Sony NEX-7 more pocketable for my casual use. 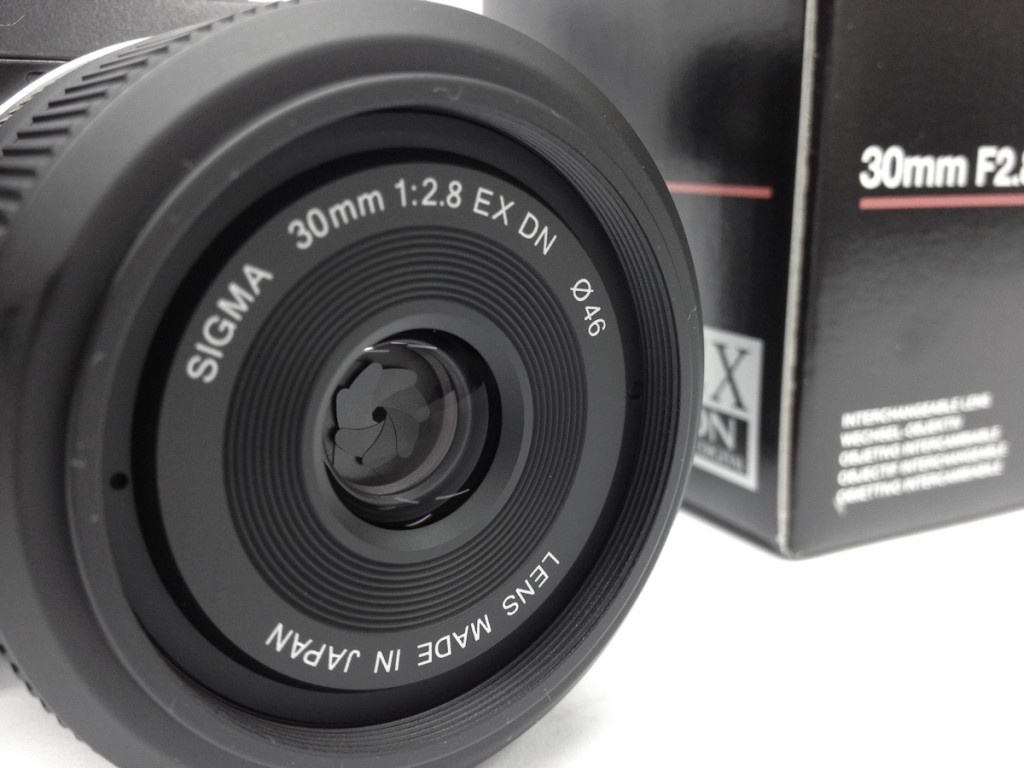 Sigma also offers this tiny lens for a Micro Four Thirds mount and might be easier to pull focus on than some of those Panasonic lenses that seem to rotate forever. It's a decent prime autofocus F/2.8 lens for about $199, check it out at B&H. 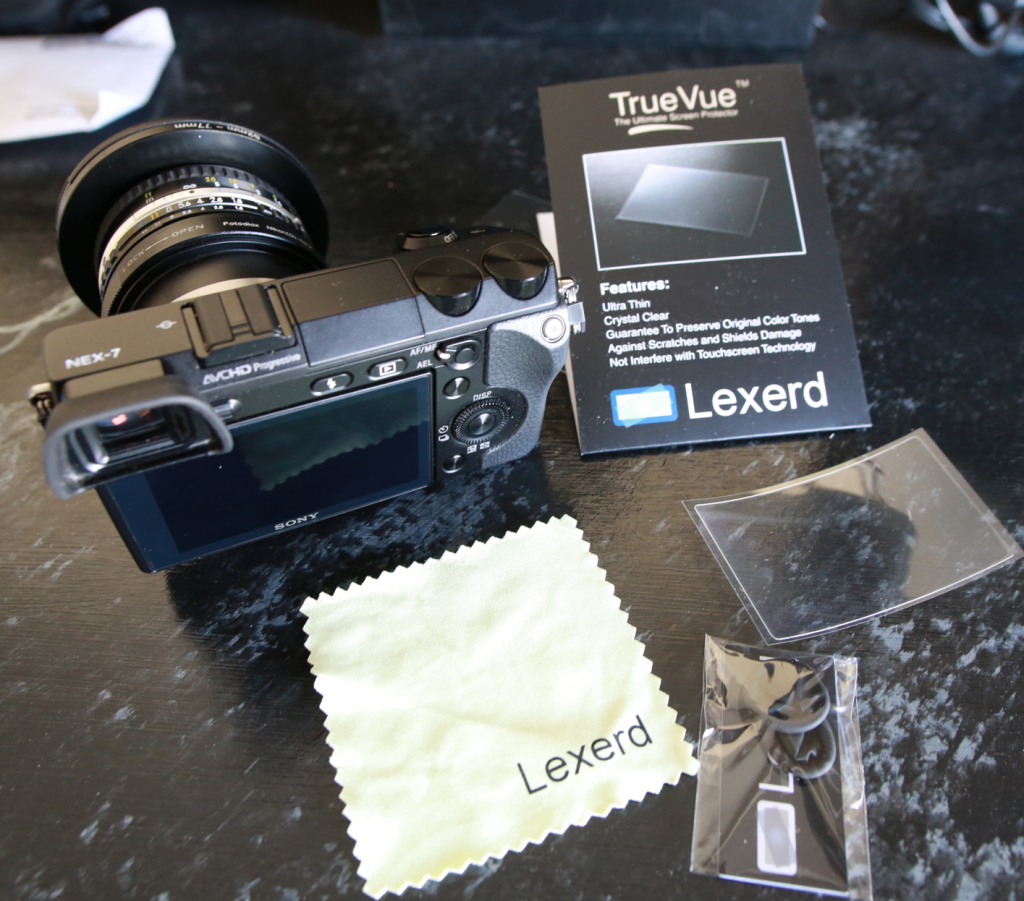 Finally had time to add the Lexerd LCD screen protector on the Sony NEX-7. The Lexerd is a thin film screen protector, much like you would use on your iPhone. Easy to apply, comes with all the right tools. There are other hard plastic screen protectors, but some may introduce more glare. The thin film type works for me on this camera. 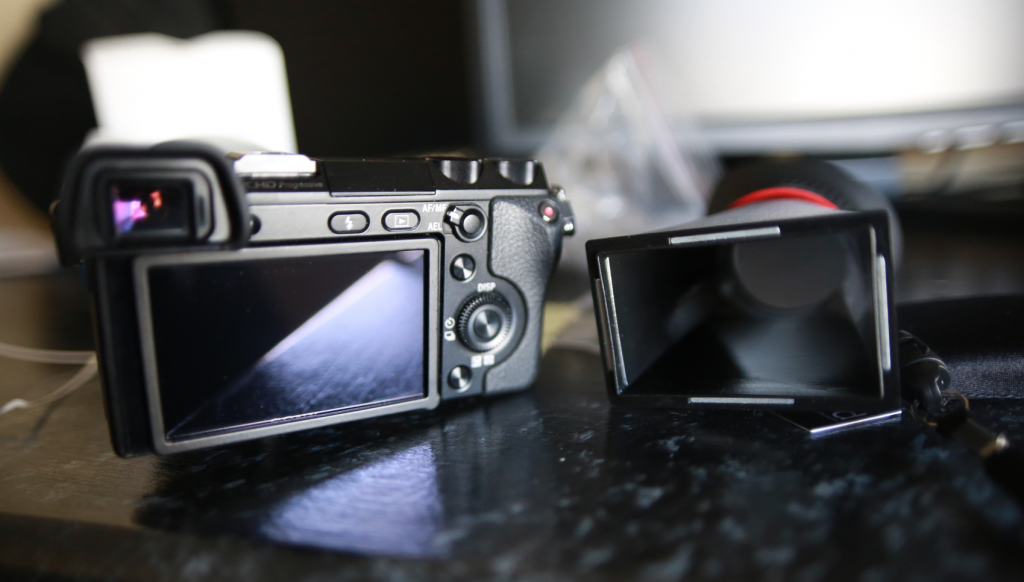 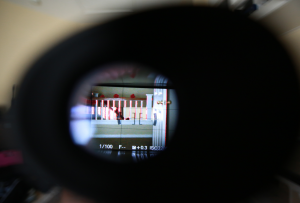 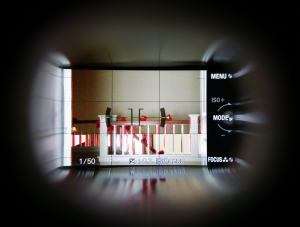 Afterwards, I decided to install a cheap 16x9 LCD Loupe for those bright days when I want to pixel peep and review my photos or video. There aren't very many options for viewfinders to fit the very wide 16x9 LCD of the Sony NEX-7, so I just grabbed a cheap one on eBay which works well to block out any light and to magnify the screen. This one fits perfectly without cropping any of the view. It might not be the best on the market, but it beats trying to cover the LCD with my hand.

Can you believe? I think it was about 7-8 months ago when I posted an article about some of Sony's new cameras to be released. One of them was the Sony NEX-7 and it's finally just available on Amazon for the first time (at regular MSRP). Right now there's only one seller who has a few of the Body Only and Body + Kit Lens available.

It's been an amazing little camera and i'm still finding new things with it everyday. For instance, nobody talks about the fact that it has a built in Digital Zoom (like T3i). I can take a 35mm F/1.4 prime and make it a 70mm F/1.4 prime. Actually it can do up to 10x making it a 350mm F/1.4, but i'll have to do some tests to see what's still acceptable - At 10x you'll likely just see a bunch of blocks. The 10fps burst mode is just plain awesome and you'll never miss an action shot.

The EVF with Focus Peaking (red lines around sharp areas) will ensure you're getting focused images even if you're working with old manual lenses. I've adapted Canon EOS, Nikon, and Canon FD lenses for cheap. Yes it has a microphone input too. Unlike Canon it does offer 1080p @60fps. They are starting to trickle in, but with the long demand, they won't last long. Check out the first Sony NEX-7 cameras available on Amazon (click here).

If you didn't catch it already, Olivia has some sample footage from the Sony NEX-7 on Varavon's latest mini Slidecam Lite video slider. I have yet to put my own montage together as soon as I can find something interesting to shoot with it.

Sony had some major problems manufacturing the Sony NEX-7 camera, and it has been extremely delayed with very limited inventory. The good news is that Sony has ironed out some of their production issues and this awesome new camera is starting to ship and orders are being filled. You can order one from B&H (click here for Sony NEX-7 order), and if you're the impatient type there's a bunch already showing up on auction (click here for Sony NEX-7 auctions) 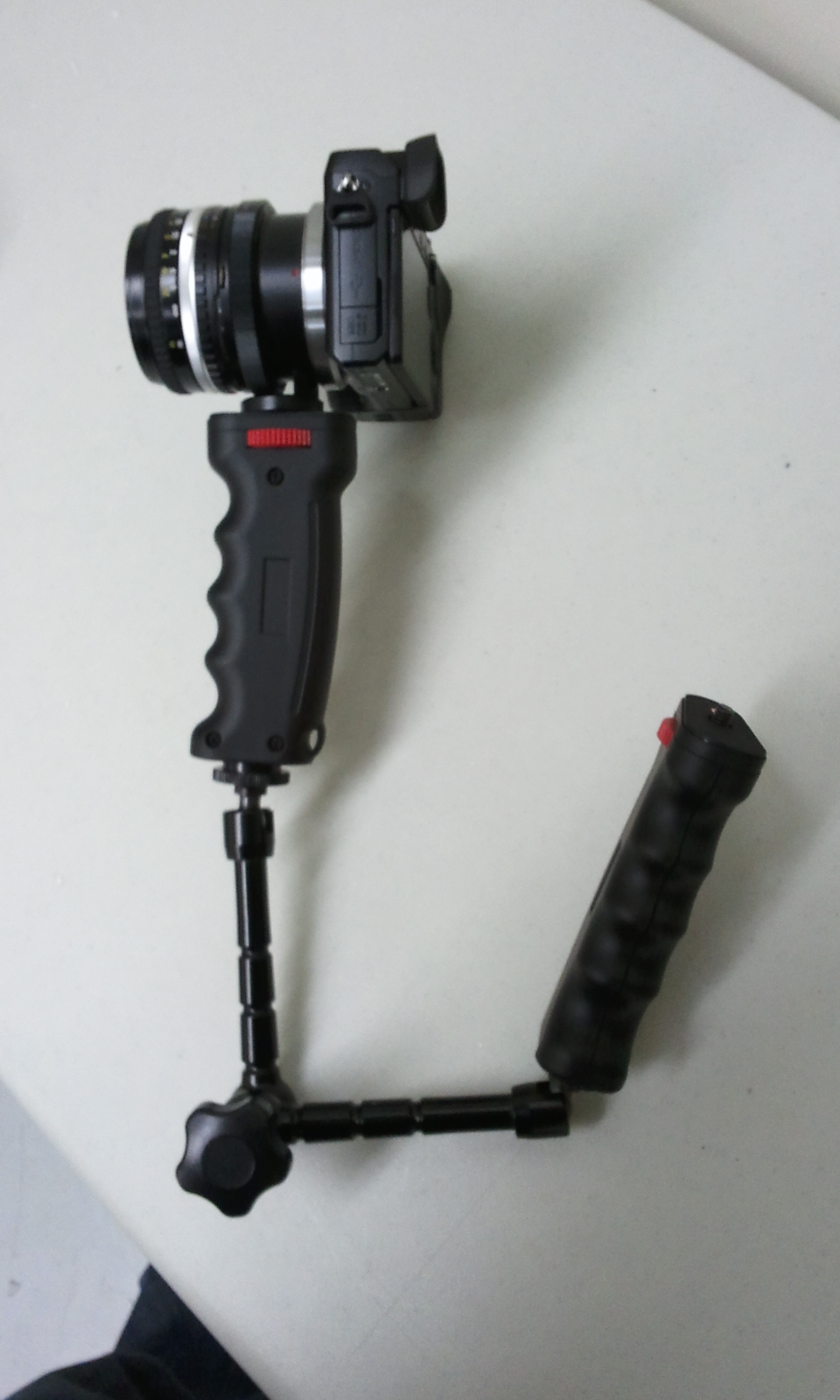 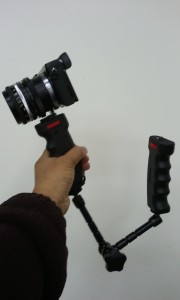 I'm officially lovin' the new Sony NEX-7 camera that just dropped in today. The quality, performance, and build is amazing. So far i've tried the Canon 28mm FD lens, Rokinon 35mm F/1.4, and Nikon 50mm F/1.8. Of course my favorite is the Nikon 50mm F/1.8 pancake because it keeps the camera pretty small (that's the whole point of using an NEX7). Sorry I have no samples yet as I haven't had anything interesting to shoot today. 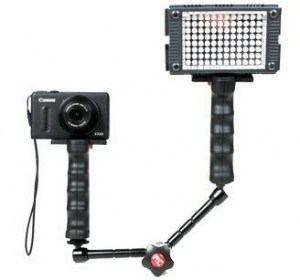 The video quality is also quite amazing, but it's nearly impossible to shoot hand held with this tiny camera and these old manual lenses. The Nikon 50mm F/1.8 feels more like it's at 100mm (without image stabilization). My solution is to use the dual PNC Custom Pistol grips and friction arm configuration. Instead of using it 'fig rig' style, I turned the rear handle sideways and used it more like a gun stock placed against my chest. This made a world of difference and totally eliminated the micro vibrations and rolling shutter 'jello' effect. When it's time to pack things away, the whole setup breaks down to just two handles and a folding arm. The Custom PNC Pistol Grip Camera Handles are back in stock at PhotographyandCinema.com or via eBay for International buyers (below). 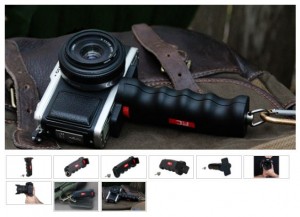