I'm sure some of you have already read the reviews, and i'm still working on a short review myself on the Sony A7rII but I can tell you right now this camera is worth every penny. It's been tough to find and out of stock, but today it's available via B&H (click here).

I had the opportunity to shoot with the Sony A7RII this weekend, and really put it through a full day of shooting. The 4K video will shut down if you push the recording times past 15 minutes, and then if you keep pushing, the time before it shuts down again gets shorter and shorter.

I was very worried about this, but I really wanted to see how it could hold up and volunteered to shoot a full wedding. As much as possible I left it on the 4K video setting. For most clips I shot no longer than 5-7 minutes, and it worked perfectly all day. Working off a V-Mount battery, I even left the camera running without powering it down most of the day. There were only a few times I switched to 60p for slo-motion, but other than that it was 4K all day.

I used the same Metabones adapter I typically use on my Sony A7s, and even that had absolutely no hiccups with the Canon 24-70mm, 24-105mm, and 70-200mm. I know a lot of people are waiting for the new A7s II, but after a full day shooting I wouldn't hesitate to sell off my Canon 5DM3 and Sony A7s camera for one of these right now.

The new A7rII is priced higher than an A7s, but there are so many features that make it worth it. First if you want dynamic range, it seems to better than the A7s. If you like shooting with SLOG (especially during the bright day), the A7rII minimum ISO is only 800 while the A7s is at an unmanageable 3200.

The A7RII has IBIS (in body image stabilization) and I no longer have to pick and choose lenses with Image Stabilization. I feel confident throwing anything on and handholding the camera or using a small shoulder rig. The new Sony A7rII also shoots 4K internal to SDXC cards, while the A7s requires you to output via HDMI to an expensive 4K Recorder.

Build quality on the A7RII is also way better than an A7s with a larger hand grip and a very solid hot shoe. The lens mount is also much more solid than on the A7s (no wobble). Don't get me wrong. It's not perfect and still has issues like a very short battery life, but for a Sony mirrorless hybrid in this class, it's the best Sony has ever put out. 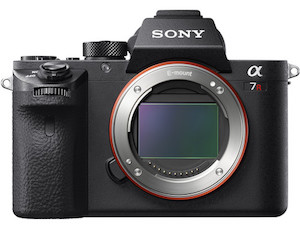 13 thoughts on “The new Sony A7RII In Stock”