So it was very last minute for me to get a 14v battery pack thrown together for my 352 Ring Light Steadicam project here: https://cheesycam.com/last-minute-glidecam-mods/. Now that I have a bit of time, i'm going to get off these non-pro looking RC batteries and rig up my 2 year old LP-E6 generic non-decoded batteries.

Gutting out some dirt cheap battery chargers and using them as dummy plates, i'll be able to wire two of them together and get a 14.4V power source that looks pretty snazzy. Other people have done this with just one battery to power up LCD monitors that only require 7volts. As you can see my 183 LED light normally powered from a 12V source was easily lit up with just 7V. Now setting them up together for 14.4V should suffice for many of my small items.

Since the guts are ripped out, you can use OEM Canon batteries, no need for Generic stuff, but the Generics run super super cheap too. I think i'll purchase more generic battery chargers + non-decoded batteries and have like 20 of them on hand to power up all kinds of stuff including my Ring Light and Z96 LED's.

This link has a decent deal for both a battery + charger: Both LP-E6 Generic Batteries + Charger

The LP-E6 is the battery type used in the Canon 60D, 7D, and Canon 5D Mark II. This AC power adapter will power your camera from any AC outlet. There's usually several cameras going at one time and to compliment the stationary tripod shots in the studio, I decided these AC adapters help save me time from charging batteries. I can use my other batteries for the more mobile cameras. Having constant power to a few cameras is also one less thing to worry about when we've got only two guys manning 4-5 cameras. As you can see the cords are very long, so even without an extension cord, they are quite usable on it's own. These cameras don't require much power, and I verified that it works with my little portable $99 dollar battery pack which should give me more than a full day's worth of power. Extended Timelapse shooting? You'll probably think about something like this. If you're in studio, or even on constant location shoots with a static tripod shot, a battery pack and this ACK-E6 battery adapter is definitely a handy thing to have in the bag in case you run low on batteries.... 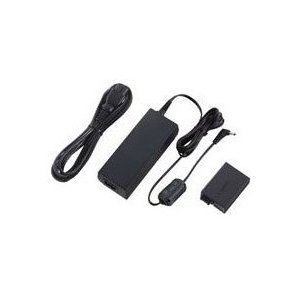