and enjoyed it so much, I went out and purchased the latest model (then sold off the older one). It's a tiny little stabilizer that packs up small, performs excellently, and has amazing build qualities. Unfortunately it's a bit expensive compared to other stabilizers, so i'm happy to see another person like Carl Pendle from www.carlpendle.com using it. I'm not alone in this world..

This time Carl shows how to modify the Flycam Armbrace

to fit the Skyler MiniCam for extended flight times. After the modification, he also shows a clever sling he uses to help him carry the entire weight, and stick around to the end for some fine examples of his Skyler Minicam in use. [Thanks Carl]. I have some additional information about the Skyler Minicam vs. Glidecam vs. Flycam (seen here) if you're still wondering what some differences could be.

For those who wanted a better look at the Flycam Armbrace

, here's a quick little show and tell. The Flycam Armbrace

is used to help carry some of the weight of a stabilizer off the wrist. Glidecam also sells a Forearm Brace (seen here), but it's bit more expensive and looks like it will only fit on the Glidecam due to the larger OD on the post.

One common question is 'Does the Flycam Armbrace work with the Glidecam?'. The answer is 'YES' the Flycam Armbrace does work with BOTH the Flycam and Glidecam HD1000, HD2000, and HD4000 stabilizers. It uses a smaller OD on top and steps to a larger OD for the bottom of the post (as seen in the video). Coincidence? You be the judge. Using an arm brace will help relieve some weight from the wrist, but keep in mind that it will not solve the weight carried from the Bicep and the stabilizer will still be just as heavy. The Flycam Forearm Arm brace can be found via eBay (click here).

This video is complete rambling about different feature sets of a few 'Small Camera stabilizers' I use. I have quite a few very large ones as well, but for now i'm just touching on these specifically because they are so close in what audience they are intended for. The three small stabilizers i'm showing are the Flycam Nano

, and the Skyler MiniCam

(new and old). If you're not interested in knowing about the differences of such products, I suggests you skip this video since it's quite lengthy.

I'll start by saying that it's possible to get excellent results from ALL of these stabilizers. Don't be fooled to thinking you'll be achieving excellent results on the first day, even if you wanted to spend thousands of dollars on high end gear. With any stabilizer, it will require practice, practice, and even more practice. This video will probably generate more questions, but hopefully it's an insight of the different things to look for when shopping for a stabilizer.

The Skyler MiniCam is the most expensive of these three small stabilizers. It's also the smallest and lightest, but yet can still fly just as much weight. You can remove all of the parts from the Skyler for travel and set it back up without having to rebalance. Everything falls perfectly in alignment. It also offers a quick release stage - not only for packing up, but it can be used to move your camera to a tripod, slider, cage, rig, etc with the included 'mounting base plate'. The design of the lower sled makes it easy to adjust up and down for weight compensation, and does not have the same potential to shift (like the Glidecam and Flycam models). Build quality is top notch.

If you're just starting out, doing it as a hobby, or just curious about flying camera movements you could start on the lower end. The actual practice of flying a stabilizer is more important than the stabilizer itself. Sell it off later when you're ready to upgrade or try renting one for a weekend to see if it's something you're interested in, and how often you think you'll be using it. If you're already flying a stabilizer and need more of the convenience of fine tuning knobs, quick release plates, compact for travel, and ease of rebalance, then look for the higher end models that offer some of those features like the Glidecam HD or Skyler Minicam.

I get it. Sometimes you fly a stabilizer around and need to take a pause for a long static shot. These things can get quite heavy, so being able to stand on it's own could be beneficial for event shooters. Varizoom offers a Monopod / Stabilizer called the FlowPod (seen here), but when used as a stabilizer, it didn't really work out very well. Varizoom also makes a Crossfire Stabilizer (seen here) that doubles as a small Tripod too. None of them I think work very well, mainly because of the Gimbal setup they are using.

Wondlan also recently showed a Carbon Stabilizer that can be extended to work as a monopod, and they used a better Gimbal system like the Glidecam type stabilizers. I think they fell short a bit here because the sled was a little too small. If you think you need a stabilizer that doubles as a stand, here YouTube member NitsanPictures shows how it could be possible to modify your own with a Glidecam, and possibly even the Flycam by connecting to the 1/4" female thread under the post. It seems to work pretty good, but I think there are other Monopod designs that would make it easier to telescope when needed. [Thanks Nitsan] If you guys haven't seen a Glidecam Stabilizer in use, check out some of my old videos. 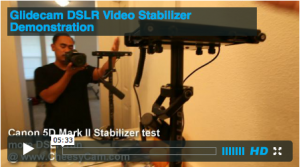 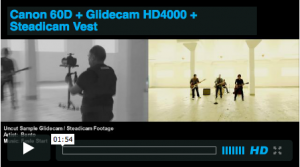 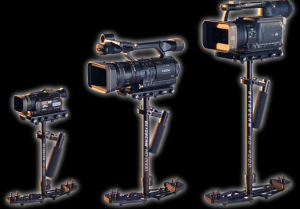 Is it me or is this something new from Flycam? I don't remember seeing something exactly like this before in their product line. It's a new body vest support for those Flycam DSLR Stabilizers. It doesn't look like your typical spring loaded isoelastic stabilizer arm, so it may not be used for walking or running shots. It looks like it's just a system to help carry the weight, like the Body Pod system available from Glidecam (found here)

- only it looks better. 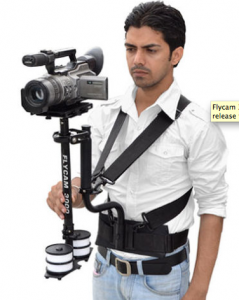 The new Flycam Body Vest / Stabilizer Arm can be adjusted up/down, left/right, and angled in just about any fashion you can think of. The different joints in the arm can be locked in place, but I wonder if it can still be used and redirect some of that weight if it's left fairly loose.

So far it's only available as a combo with a Flycam, but it doesn't look extremely complicated if it's a DIY build you're looking to tackle. Found below (click here) 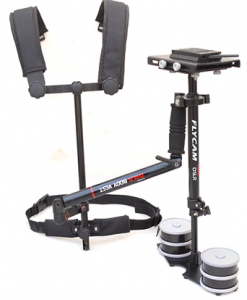 Some BTS of a DIY stabilizer we put together last minute. Working with the GoPro 3D Rig we wanted to get an unusually low tracking shot. A wheeled dolly would have a hard time in the urban streets, so a slightly modified Flycam Nano was the solution. The Flycam Nano received an extension below to hold the GoPro 3D Rig, and an extra GoPro was used to output the video up to the SmallHD DP6 monitor. A few counterweights taped to the top was added to balance it all together. I need to get the awesome footage from the GoPros later..it was quite amazing to get flying shots at that super wide low angle..

I think i've received at least 2 questions/day since this new 'Flycam Nano DSLR' had been advertised online. It's quite confusing since there already is a Flycam Nano that supports DSLRs. This one claims to be better and can handle more weight. Of course it does! It's bigger and looks almost exactly like the Flycam 3000 (far right). Did they just swap the handle and slap on the Nano name because the hottest search term is 'Flycam Nano'? The Flycam DSLR is just about the same price as the Flycam 3000 too. To me it just doesn't make sense.. what do you make of it all?

My personal opinion is that you should use the max capacity for any stabilizer. If you get something bigger than the original Nano, then you may have to end up adding more weights to the top of the camera in order to make it fly better. So do you need a larger one? Unless you're pushing more weight that the common 7D + Tokina 11-16mm (BTW you can balance a bit more than that), then you don't need to go to the next level. I have several stabilizers and the one I take with me the most is the smallest one I can pack to do the job. The Glidecam HD4000 and Steadicam vest are only called upon when I really need to carry some weight...

Vimeo member Satva Leung shares a Flycam Nano stabilizer test with me. It's pretty nice to see someone fairly new to stabilizers get great results, especially from such a cheap piece of equipment. Flying a Canon T2i + Tokina 11-16mm (same lens I used on a few tests), check out the results. I haven't flown my cameras around in a while, I think next week i'll take the GH2 or GF2 out for a spin with the Flycam Nano. [Thanks Satva] 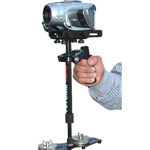 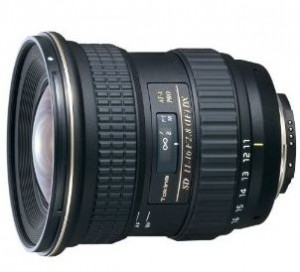 . This is one of the cheapest stabilizers I've reviewed on this blog that was able to balance a 5D Mark II + Sigma 20mm Lens. That's about all I was willing to push, but Aaron's managed to practically double that up while still using the stock Gimbal. The mods to add a Lilliput 7" monitor to the little stabilizer allows Aaron to add more weight to the top with a T2i + Battery Grip and 17-55mm F/2.8 IS lens (nice lens). He's also added a new handle which is one of the most common complaints on this particular stabilizer, replacing it with one from an old Flash Bracket . The video is a bit long, but all good information, so stick through it and hopefully get some ideas. Also note that the IndieHardware stabilizer is always in and out of stock, but you can check current pricing and if it's available below.