Some people just want to stick with AC powered Hot Lights. No worries about flickering, multi-shadows, green casts, or batteries dimming down. In a smaller package Quartz-Halogen lights can throw further and output several times the amount of LED light and can be used with Gels and Diffusers without as much loss in light output. We're talking about enough light to use outdoors during the day for that extra fill. Here's one that's been popping up just about everywhere, going by the name Sakar. There's two flavors to these Sakar Quartz-Halogen lights

found in 150 watt and 300 watt versions. Very similar bulbs to the popular PAG lights from back in the day (loved those lights). I'm not sure, but I have a feeling the 300 watt version might be too much for it's little housing and may suffer from premature bulb life. For a traveling light, 300 watts will probably blow a fuse in your location. The 150 watt version might fair better, and i'm interested in seeing how they work out.

This is not a battery powered light, as it can only be powered through a 120V-120V AC outlet but comes with a 9 foot power cord. It is also not setup to be dimmable (although you can probably run an inline dimmer using a simple Router Speed Controller

). The front portion of the housing is all metal with a glass cover. The rear of the housing is mostly plastic. I left the unit on for about 10 minutes and didn't notice the rear housing being overheated, but the front metal and glass elements were pretty hot. There was a bit of smoke coming off the barndoors (cheap paint?) but stopped after a short while. I've seen this on other cheap lights before, and always has to do with the high heat and cheap paint combination. Luckily they cool down pretty fast when not in use. 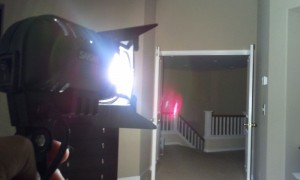 It can be mounted via Hot-Shoe or through a 1/4 x 20 threaded light stand. There's an umbrella holder spot in the middle of the light to use as a diffuser or bounce. The two front barn doors are pretty much useless and don't serve any purpose in controlling the light output. Although the Barn Doors work well to pack the light up and protect the front glass lens. One thing this Sakar 'can do' is put out lots of light. Since it's using a quartz-halogen bulb the light output is not as yellow as tungsten. The unit is small, and it would be great to put together a traveling kit that has a crap load of light output in such small form factors for dirt dirt cheap.

Arri has a nice 150 watt Fresnel 3 piece kit (also not dimmable), but a bit out of my budget.

Will it hold up though? One common mistake people make about these types of bulbs is that they might only be rated for 50 hours of use. You'll see many reviews talking about consistent bulb failures, but what they don't realize is this is not the type of light to use for feature length films. These lights aren't as efficient as LED bulbs, but they'll work hard in giving you tons of light in a small form factor and then die young. If you're not using them everyday, they could last you several months. It's a great idea to buy spare bulbs, which should only run you about $5-10 dollars each. I'm planning on putting it through it's paces in the next few days.