Rik Cordero over at RunPlayBack.com put together a nice BTS look from one of his recent projects. The new music video for rapper Joey Bada$$ was put together using fairly accessible consumer priced equipment.

A Varavon 3-Axis Birdycam Gimbal was used to help stabilize the handheld and tracking shots. A broad throw of light was offered up by the massive ePhoto R640 LED Ring Light (found here), and a GoPro HERO4 on a DJI Phantom Quadcopter with FPV setup was used for aerials. According to Rik, this massive 640 LED Ring Light was extremely versatile and used almost throughout the entire video. I'm a big fan of this light as well.

Here's a look at the BTS video.

And here's a look at the final edited piece

I'm just throwing up a bit of a summary here, but you can read an entire article about the workflow and tools used on this and other projects over at Rik's site https://RunPlayBack.com

The new ePhoto R640 18" LED Ring Light recently shared on this website had a great reception. If you were on the fence about trying one of these out, you're in luck since ePhoto has allowed us to give one away! 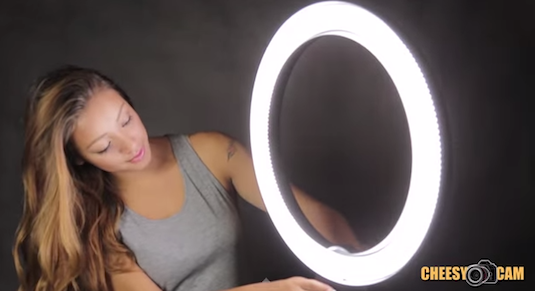 The R-640 uses high quality LED bulbs with a CRI rating of 95, color temp at 5400L, and over 1670 LUX [155 FC] when tested at 3 feet. To watch our Product Overview Video and to register for this giveaway (usa residents only), check out the Swivex page (click here).