is continuously becoming more and more popular with more cameras supporting clean HDMI signals. Instead of your camera recording to a compressed file to an SD or Compact Flash card, the feed is recorded in the Shogun to a variety of high quality formats. Aside from just being a recorder, the Atomos Shogun is an amazing full featured high resolution monitor with waveforms, peaking, zebras, and more. The fact that it can see a 4K signal also makes this ideal to monitor from such cameras that only output 4K where other monitors won't work.

HDMI itself though can be problematic as there is no locking mechanism to keep the connection solid, and as the cable protrudes, there is the possibility of damaging the HDMI port. If you're working with the Atomos Shogun, and want to instill a higher level of confidence, check out the PVGear KavalCage with HDMI Locks designed for the Atomos Shogun.

At almost $2,000 dollars, I think the Shogun's ability as a 4K Recorder, Monitor, and Audio Preamp makes it worth every penny, but it might be worth spending a few bucks more for the PVGear KavalCage system to protect the Shogun during use. 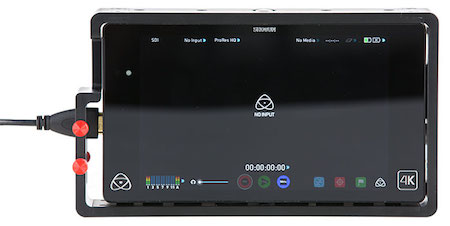 Rik Cordero of RunPlayBack.com gives us a little insight on the latest Atomos Shogun Firmware Update that now offers downscaling to 1080p on the HDMI output. The Atomos Shogun is primarily a video recorder mounted with the camera, and so this downscaled output feature is especially handy when you have to share the feed to a director's monitor (most people aren't working 4K monitors yet). The Shogun also now supports previewing 3D LUTS which allows you to get a better idea of your final grade so that you can set better color and exposure while recording.

While I think very highly about the Atomos Shogun as a 4K Video Recorder, Audio Preamp, and high resolution Monitor, the unit was designed with a plastic exterior. It certainly is lightweight, but also feels fragile (it's probably very sturdy, but feels fragile). Other Atomos products such as the Ninja or Samurai Blade

Most of the cameras i'm capturing 4K from outputs via the HDMI port. Obviously, a few things I'm always worrying about is cables being pulled loose during production, or possibly even damaging the HDMI port. I've managed to do this on a few monitors already (including a SmallHD, and on a
GoPro HERO3

). I'd feel more comfortable if the Shogun HDMI had some type of protection.

The Shogun is still fairly new, but fortunately two companies are already working on Cage solutions for the Atomos Shogun. Any person who currently owns or plans to own the Atomos Shogun 4K Recorder should be interested in these new products.

Shape has teased a few images of their new Cage for the Shogun via Facebook. There appears to be something setup for the HDMI Cables (possibly locks) and a ton of threaded areas for mounting. Optional handles for possibly holding as a Director's monitor. The additional 15mm Clamp would come in handy for mounting power options as the Atomos seems to eat through batteries pretty quick. Not much more information, but Shape says they'll be showing this at NAB 2015 and i'll make sure to stop by and have a chat. [Visit ShapeWLB.com for more news] 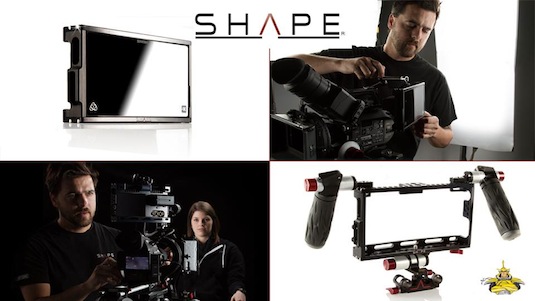 PVGear has also announced a metal Cage for the Atomos Shogun. Also with HDMI locks for both Input and Output HDMI ports, and a separate protection block for the XLR Audio Cable which also locks down the DC Cable. Pricing has not been announced, but expected to start shipping in April. 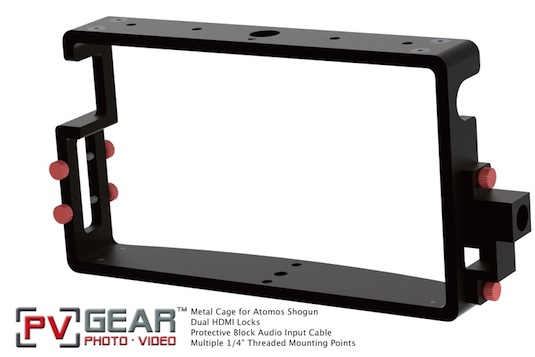