Lucky to have a few talented friends over helping us practice with some of our new #LiveProduction equipment, and trying out best software settings with #OBS. During our tests, there were a lot of things we could (should) have done better, differently, or more efficiently. "Practice is key, don't be afraid to fail, it's all part of the learning process". #LearnByDoing #PracticemakesPerfect . . #livestream #liveswitching #LiveProduction #Atem #AtemHD #Ursa #Ursamini #ursamini46k #ifootage #multicam @dvestore @cameramotionresearch @ifootage_international #blackmagicdesign #Osee @elvinreyes @iamretep @cametv @aputurephoto

(with beauty dish), and an OSEE Monitor (used for multiview).

If you're looking for a small (hard) source LED light with bright output, you might want to consider the Aputure COB120T (tungsten 3200K) or COB120D (daylight 6000K). It's an impressive design that offers many sought after features such as the ability to be powered with batteries (v-mount or AB mount), Wireless Control, and a native Bowens mount for light modifying using inexpensive and readily available Bowen mount accessories

With high output somewhere between a 500w and 750w Arri Fresnel, integrated umbrella holder, and bowens mount, it can be adapted to a number of different use cases. Remove the collector and it can throw enough light to boost ambience in a room, or set it behind a scrim for a large soft source. But as versatile as it is, there may be few things to keep in mind if you're planning to add this to your kit.

The Aputure COB120 LED Lights is smaller and lighter than an Arri 1K fresnel, but all of it's parts, I wouldn't refer to them as super compact. I'm a big fan of lights that can be battery powered, but if you plan to power the Aputure COB120, you'll need to ensure you're buying good (typically meaning a bit more expensive) batteries that can handle the constant draw. High output doesn't necessarily equal far throw. If you're in need of throwing the light output further, they do offer a Fresnel adapter, but I can't say i'm a big fan of the overall bulky design.

Outside of those small things, the COB120 has a quality build, excellent color reproduction, and many desirable features you would want in an LED light. Starting at around $600 US each, I don't think you necessarily have to have a complete lighting kit comprised of COB120s, but having a one or two would certainly be a great addition to any lighting kit.

A small but incredibly handy feature, but one that many other LED lights currently lack. True Wireless control (not infrared no LOS needed) of your @aputurephoto #Lightstorm LED Lights. The #COB120T and #COB120D are great spots for small teams covering an event (i.e. Weddings) while being able to control every single light in the room. Position one at the head table and kick it on during speeches, set one up at the cake and kick it on when needed, and set one or two up on the dance floor and kick on when needed. Control On/Off and Intensity (output). You have (3) different channels, and each channel has (4) different groups so that you can control a crazy amount of lights. No need to run around adjusting every light in the room. For areas where you can't run a power cord, run them from v-mount or AB batteries. Will be positing a video soon on my site, mainly just about my general thoughts when I use these lights... 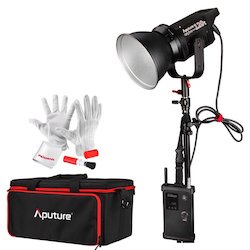