In case you felt there weren't enough options for motorized gimbal stabilizers, the latest DJI Ronin should begin shipping in just a few weeks. Introduced earlier this year at NAB2014, the new Ronin can support anything from a small micro four thirds camera up to a 16lb payload and comes with Auto Tuning software when which they say may not even require you to pre-balance the camera (of course it will always be better to).

If you're working with a small setup, i'm not sure if the price and the size of the Ronin will be appealing, but for cinematographers who need access to a gimbal capable of flying a heavy Camera system there were not many Gimbal systems that could compete at the same level as the expensive MOVI.

Typically the MOVI stabilizer systems are rented, but now for $2999 dollars I think many of those professionals would rather own the tool. The new DJI Ronin is available now for Pre-order and begins shipping in August 2014 (found here). 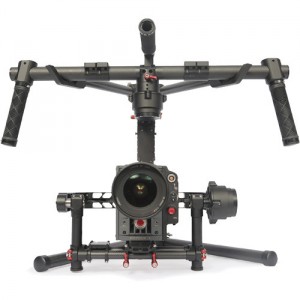