If you've been following the long wait for the Atomos Ninja HDMI recorder, then you'll know it should start shipping this week (hopefully). It's a sexy little unit that acts like a low res monitor, but is really a portable recorder to capture uncompressed Video goodness. Many times this is done by connecting a Video camera to a computer of some sort and a capture card. Above is a nice little example from Vimeo member UrbanFox.TV or what the Ninja is all about. It's already been delayed for several days and i'm waiting to see some examples.

DSLR shooters probably aren't going nuts for something like this because it's pretty rare to get clean HDMI out for recording. Sure the 7D outputs in 1080, but there's something not quite all there.. Other non DSLR camera shooters who use higher end Canon's, the fancy Sony's, and Panasonic are literally drooling for a portable solution to capture uncompressed HD output signals. Sony camera like the EX1 will need SDI input on a recorder, so soon another version 'the Samurai' will meet those requirements. [Note: Though your camera may output uncompressed signals, the Ninja saves the incoming signal to Apple ProRes]. Rumor mill is that only 250 units will touch US ground on this first shipment and who knows when the next batch arrives. If you weren't on the pre-order list and didn't get confirmation to receive one soon, it looks like someone is making one available via eBay. 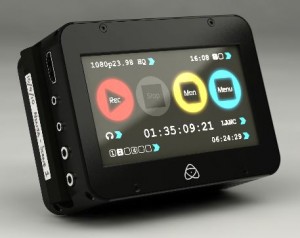